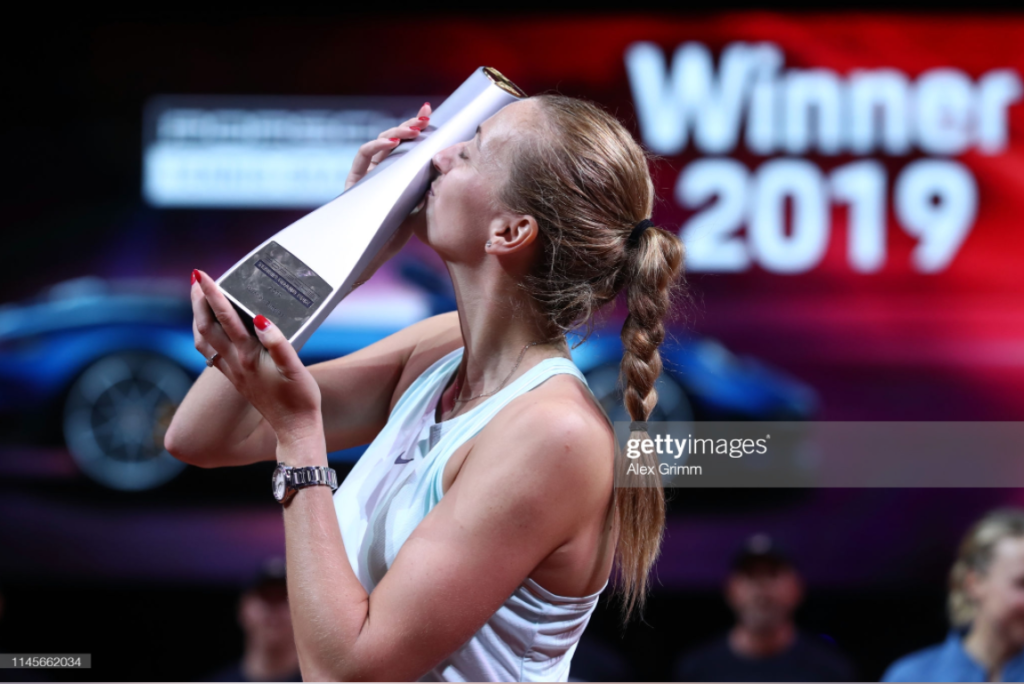 History…  The Tournament is staged from 1978,at first being played in Filderstadt, but then relocated to Stuttgart and Porsche Arena from 2006. Interesting fact is that it changed surfaces from Indoor Hard to Indoor Clay from 2009 and also gained Premier Event status since then.

It has emerged as a top location for many girls to test their strength and abilities against the field early on the clay court swing and has managed to always attract big number of high ranked players that made the event that much prestigious to win.

The Porsche Tennis Grand Prix, like many others,was cancelled last year due to Covid

Petra Kvitova is the defending champion,she defeated Anett Kontaveit in the final in 2019

You can’t find a better tournament with a 28 player draw than this one. 7 top 10 players including world no.1 Ashleigh Barty and the likes of Halep.Kenin,Svitolina,Sabalenka and Czech power hitters in the face of Karolina Pliskova and Petra Kvitova round up the seeds.

Barty hasn’t played the event before and comes here after surprising defeat in the hands of Paula Badosa in Charleston just 2 weeks ago. She still has over 1200 points lead to No.2 Naomi Osaka who won’t play in either Stuttgart or Istanbul

Elina Svitolina helped her country win the Billy Jean King Cup playoff tie against Japan over the course of 2 days Friday and Saturday. She cake-walked against Muramatsu, but had to dig deep vs Naito coming back 3 times from a break down in the deciding set to secure the win.  The Ukrainian player is in the same half as Barty and a potential Semi will be a rematch to their encounter in Mami, less than a month ago, an end-to-end victory for the Australian. A similar big test awaits her however in the QF as the defending champion Petra Kvitova is right there.

Kvitova’s way to defend her title comes through some really hard tests ahead. Being No.10 in the world, seeded and starting off the defense against no 14 Jennifer Brady is not a good sign for the things to come for sure. The Czech had a bad US hard court swing, losing in the 3rd round in Miami although was against Svitolina, but she had the match under control most of the time, but then came the one against Kovinic as a -600 favorite in Charleston which was shocking to say the least. She needs to find form on a hurry.  Despite Brady is not a world beater on clay, she still can hit hard and on a faster Indoor clay it could lead to serious problems.

Hard to describe Kontaveit as a dark horse given the fact she lost a final here in the last edition of the event in 2019,but on paper she is unseeded starting off against a qualifier and then running into Sofia Kenin,who is far from her best in last couple of months. That match would be probably priced in favor of Anett and I see her moving past this test at least

Except Laura Siegemund (2017) and Angelique Kerber (2015,2016) the last couple of years the tournament is won by aggressive tall and hard hitting girls such as Kvitova,Karolina Pliskova,Maria Sharapova and Julia Goerges. Despite being on clay,it’s indoors so it definitely favours those girls who likes to use their serve and power to dictate points and with the likes of Kvitova and Sabalenka in the mix I could definitely see someone with a similar game plan taking the win yet again