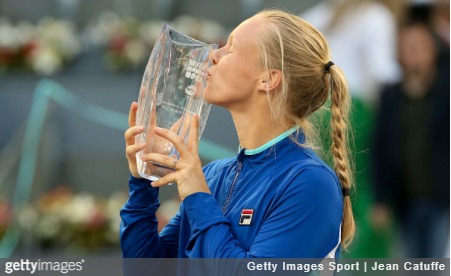 History… The Mutua Madrid Open is a join ATP/WTA event since 2009 when the ladies joined the ATP Masters event with a Premier Mandatory one of their own. The Ladies rebranded their tournament levels and is now part of the ‘Premier 1000’ structure.

Usually held simultaneously with the Men, The WTA will use the same 64 player draw as previous year, but decided to start a week earlier. The Main draw will go from Thursday to next Saturday, with the Men starting their qualifying on Saturday.

Kiki Bertens is the 2019 defending champion, and although Simona Halep was the runner up, The Romanian holds the record for number of times she reached the final here – 4,and has 2 titles in 2016 and 2017.

Petra Kvitova is the record title holder with 4.

Favourites/Top Seeds…. The Tournament is as packed as ever, World No 1 Asheligh Barty, who is fresh from her title run in Stuttgart, #2 Naomi Osaka who is looking for better outing on clay courts in her quest to regain the top ranking from the Aussie. This is what she had to say about her chances on the red clay – ‘’I do better when I don’t stress myself out and tell myself that I have to win… but it’s really hard to fight that feeling when you really want something. “At the end of the day, I haven’t played a clay tournament in two years. Haven’t touched clay in two years either.”

#3 Simona Halep who had a strong showing in Stuttgart, but run into streaking Aryna Sabalenka in the Semis, will look for her 3rd title in Madrid. The #7 Seed and Defending Champion Kiki Bertens has been up and down this year while trying to get back to form from an Achilles surgery she had in October last year. Her woes haven’t stopped though as she had recently withdrawn from tournaments in Charleston, played 1 match to help her country to defeat China in Billie Jean King Cup, but was replaced for the 2nd day of the competition and shortly after withdrew again from Stuttgart citing the same troublesome Left Achilles. She definitely shows good attitude and love the conditions in Spain: “I think the altitude is helping me a little bit. The courts, I really love them. Especially when you play on the center court or the other two courts, it’s kind of indoors. “For me, it’s like the perfect circumstances to play tennis.”

Maria Sakkari finds herself in a favorable bottom part of the draw where the seeds around her are Naomi Osaka, who has questionable game on clay and Karolina Pliskova, who despite her powerful game and huge serve has struggled under the guidance of coach Sascha Bajin, since they start working from the beginning of the year. Surprisingly, Karolina has only 9-7 record for the year and failed to win 3 matches in a row.

Maria, has failed to get past the 1st round in her only 2 main draw appearances but she was unfortunate to draw Kiki Bertens and Carla Suarez Navarro then, but do have a more preferable draw in face of Aniismova. Semifinalist in Rome from 2 years ago, the Greek know how to fight, and I could see her do some damage here.

Veronika Kudermetova comes here with a title from Charleston and a semi in Istanbul where she lost to #17 in the world Elise Mertens, all on clay and has 9-1 record on the surface. The heavy hitting Russian has a really tough draw after the 1st round where Elena Vesnina returns for a singles action from the first time since 2018 when she retired, gave birth but decided to come back. She offers huge upside with the high bouncing ball the courts Madrid offers. I consider her chances pretty good against eventual Kiki Bertens in 2nd round, but probably Kvitova will be too much for her there, we will see.

First meeting between the two lefties and quite surprised to see Kerber being priced at around +200 underdog in this matchup. Both come with suspicious form, as Marketa hasn’t played that much in this year and Kerber, despite playing, was losing mostly in R1 or R2 . The French Open finalist from 2 years ago however boosts an incredible 65-26 w/l record and 24% ROI on the moneyline on the surface and with the only bummer in Palermo last year losing to No.120 Kaja Juvan she has been consistent while losing mainly to players that are above her in the rankings or in Iga Swiatek’s case from last year, to the eventual champion. Marketa has won her last 4 matches against lefties, but I just don’t consider her that much of a favorite in this current matchup. Both can defend exceptionally well but this being the 1st time in Madrid it could take her more time to adjust to the conditions and meeting such strong player as Kerber In R1 could prove tricky.

H2H is tied with 2 apiece, they’ve exchanged a win apiece on clay and all 4 matches ended in 2 sets. For some reason Garbine underperform on home soil. She has played this tournament from 2012 and the only time she made it through the 2nd round was in 2019. Everybody would think her attacking game, faster clay court and high bounce would benefit her game, but it hasn’t happened yet.  Not to mention only 2 times from her 8 lost matches she was the underdog coming in, definitely not a good sign. All those negatives playing home aside, Garbine has an incredible year, with 2 lost finals and a title in Dubai. With a 22-6 record in ‘21 she is one of the best players on the tour and although she sustained a thigh injury in Charleston which derailed her a bit on her run, she will try to come back to the winning ways.

Sloane has been an enigma for many, even for herself, for years now. After Winning the US Open in 2017 and losing the 2018 final at French Open and making it all the way to No.3 in the rankings, her showing has been frustrating to say the least. Since then she has often engaged in long losing streaks, to players much lower ranked than her and has failed to regain form. She is so unpredictable that she might win here and lose the next one to a less ranked player, keep an eye on her especially as an underdog.