After such horrendous 2020,it was kind of normal to be expected, that the 2021 Calendar for both ATP and WTA will be made available late and close to new season resuming. In the last couple of days it was finally revealed, but not the whole one – just the first 7 weeks of it

“For the first time in more than 100 years the Australian Open will start in February and we look forward to offering the players what we believe will be one of their best playing experiences in 2021.

“From the outset, ensuring players have the best possible preparation for the Australian Open, while at all times protecting the precious COVID-free environment that the Victorian community has built through incredible sacrifice and hard work over the past six months, has been paramount.

“It has taken eight months of working alongside government authorities, here in Victoria, nationally and interstate, to give us the opportunity to present an Australian Open that will play a major role in both the economic and psychological reinvigoration and rejuvenation of Melbourne and Victoria.

“AO 2021 is going to be all about supporting local businesses – our tennis coaches, the farmers, food and wine producers, chefs, artists and musicians – and celebrating everything that is great about our country, as well as providing opportunities to those who’ve been so hard hit during the pandemic, particularly in Melbourne and Victoria.”

The tournament’s Qualifying however will take place offshore with the Men competing in Doha, while the Women in Abu Dhabi. The dates for this competition – 9-13 January. All 16 qualifiers from each draw and handful of lucky losers will then travel to Melbourne and start the mandatory 14 day quarantine.

Due to the necessary quarantine, there are no scheduled tournaments in the second half of January, but those who are already in by direct acceptance can warm-up elsewhere just after new year and then travel to the land down under.

Tournaments announced so far for ATP are as it follows :

Delray Beach in The USA and Antalya in Turkey will kick off the season and 2 tune-up 250 tournaments will be played simultaneously in Melbourne alongside shortened version of ATP Cup as well.

The ATP cup will be held with 12 teams instead of 24 with shorter time frame and only in one city instead of 3 in the prior year due to the ongoing Covid-19 pandemic.

The WTA on other hand will kick off their season in Abu Dhabi, in a newly created event and their schedule for the first 7 weeks of the year matches the ATP one with the exception that they have 1 less tournament after new year, but will host one during the 2nd week of Australian Open 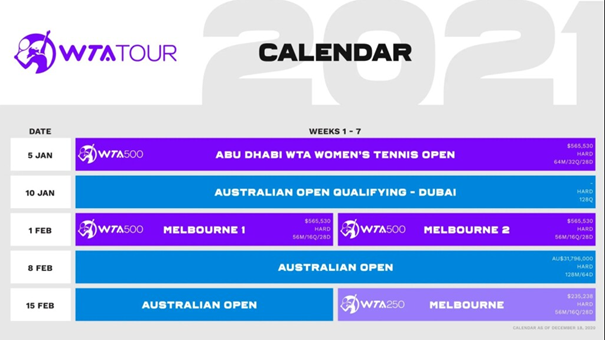 Notable tournament cancellations/postponements so far are :

After really turbulent year we all faced,and all those cancellations and lack of tournaments and matches that happened, 2021 season can't come soon enough.. We still have 2 Challenger tournaments in the coming week and some ...

Great news for all! We now have a parent company called BetQL (QL Gaming Group). This is a huge positive for everyone as it ensures the continual operation of TI well into the future and ...