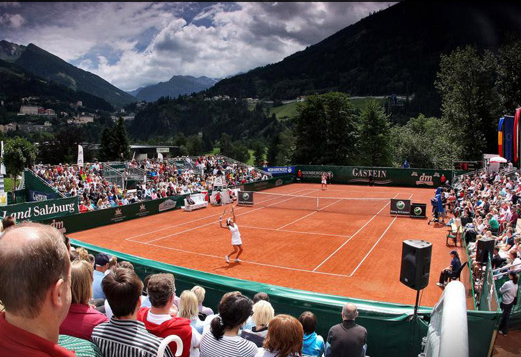 Pablo Cuevas is the defending Champion here in the beautiful city of Bastad. He could potentially meet 1st seed David Goffin in the Semis. This will be the 1st time he takes the court since losing in the first hurdle in Wimbledon on his least favorite surface. Pablo has a good 11/4 record in clay court 250 tournaments this year with a title in Sao Paulo, which moved from outdoor to indoor clay due to the wet conditions there in February, and a final in Istanbul which he lost to Roger Federer.

Goffin helped his nation to win against Canada over the weekend, but their job was easier as visitors were without both Raonic and Pospisil. The Belgian was on a huge roll around this time last year winning 4 tournaments in a row – 3 Challengers and 250 Kitzbuhel. He will look to add to the 9-5 record on the dirt for this year as he not commits in tournaments where completion is very fierce.

Robredo is the 2nd seed and has Juan Monaco and Thomaz Belucci in the bottom half of the draw to make an interesting development as the tournament progresses.

R1 most interesting match – without a doubt Almagro vs Verdasco

Unfortunately for Cuevas he needs to defend 2 titles from 2014 in 1 week this year and he has chosen Bastad in order to at least cut his point drop that is happening already.

Gael Monfils and Bautista Agut occupy the first 2 seeds in Croatia, and with Thiem in the top half and Seppi in the bottom all receive bye’s for the 2nd round

Young and talented  Andrey Rublev, who just completed the comeback from 2-0 down vs Spain in the Group 1 Davis Cup tie at home over the weekend, received a WC for the tournament. The matches were held on Indoor hard court,so he needs a quick transition back to outdoor clay.

The Russian could face the 2nd seed Agut in R2. Borna Coric is in the same quarter of the draw, that surely seems stronger and may provide plenty of headlines.

No top 20 players in the draw, but we do have Ivo Karlovic as the top seed who will look to win his 2nd title in 3 attempts in Colombia. He lost the Newport final to Rajeev Ram on Sunday in a close 3rd set tiebreak and now has to travel nearly 10 thousand km to get here. This has to be a speedy transition with the surfaces as well…

Bernard Tomic is the 2nd seed and the defending champion when he beat Dr. Ivo in a 3rd set tiebreak,las year and potentially could meet again then.

Estrella-Burgos is in the bottom part of the draw as he looks to repeat last year’s SF performance when he took out Richard Gasquet in the process before losing a tight all TB sets match to Tomic.

Adrian Mannarino, the 3rd seed is in the half of Karlovic and had a semifinal in 2013 but lost in R1 last year.. Pretty open draw if the Croat is jetlagged from the short recovery time and with always unpredictable Tomic we may have a surprising winner.

Defending Champion of the tournament is Caroline Woznacki but she is not here this time.

Venus Williams is the top seed and she opens up with Katerina Bondarenko and will potentially face either Camila Giorgi or Alize Cornet in the 1/4 finals.

No.2 seed Elina Svitolina was surprised in her first round by the very streaky Magdalena Rybarikova and will now try to prepare for her title defense in Baku next week.

With Pavlyuchenkova out already, losing to last year’s finalist Roberta Vinci, only Jankovic and Pironkova are the seeded players left in this section of the draw and both haven’t even played their first round match…

Last week’s Finalist in Bucharest Sara Errani is the top seed in the 8-th edition of the tournament. She has what may seem an easy draw with facing Qualifiers in the first 2 rounds of the tournament, if things play out she could face players coming from that draw up until 1/2 final..

Sam Stosur is the 2nd seed and comes after a disappointing second round loss in Bastad last week in hands or Lara Arruabarrena with a bagel in the second set.

Newly crowned Bucharest Champion Anna Karolina Schmiedlova is the 7-th seed and could potentially face Sam in the semis, but with some really interesting and unpredictable players such as Andreea Mitu things could well get intriguing in Austria. The Slovak has shown great improvement and is having breakout year with 2 titles under her belt already and one has to wonder, if she has enough in the tank to pursuit another one in consecutive weeks