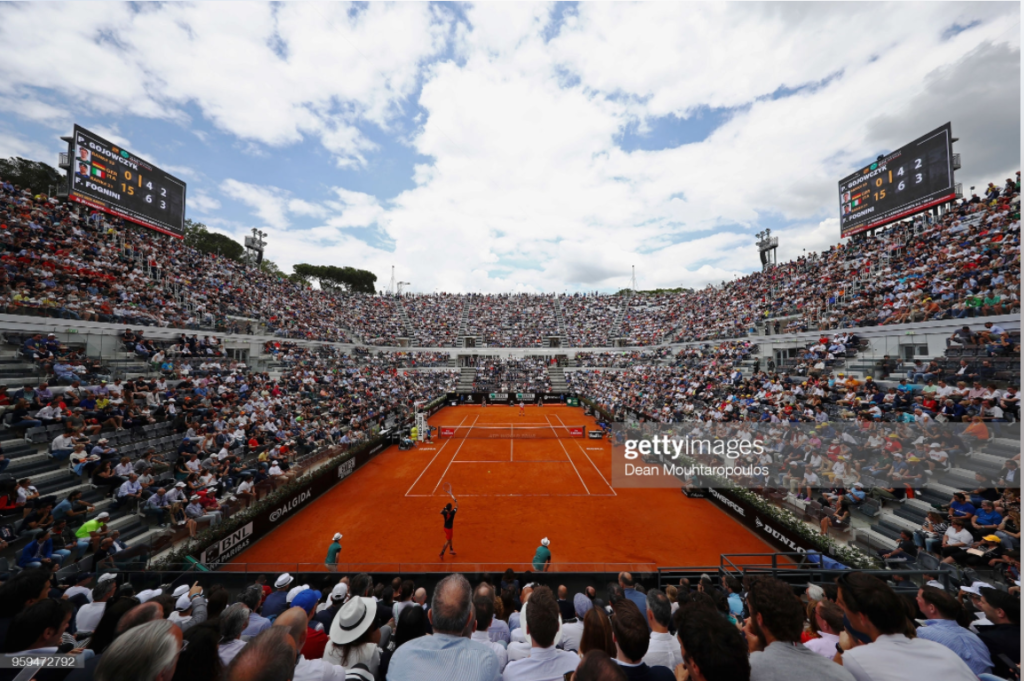 History…  The Italian open was founded 91 years ago and has been played at Foro Italico since on clay outdoors. It is one of the most prestigious events in the tennis calendar with Rafael Nadal holding several records here including for most titles won with 9, most finals with 11 and most consecutive titles with 3.

The Spaniard also won both the longest final – a total of 57 games in 2006 against Roger Federer, when the Masters finals were played in best of 5, and the shortest one, again vs Federer in 2013 with a total of 16 games.

Played in September last year, due to calendar rearrangement from the Covid-19 depleted year, Djokovic took the title beating Diego Schwartzman in the final. The Serbian returns to defend his title after skipping Madrid.

Only Roger Federer is missing from the top 16 seeds of the competition with the last accepted player being the #51 Lloyd Harris. For a 64 draw that includes 8 bye’s this is probably the lowest direct entry number I have personally seen in a Masters Event.

As already pointed out, the defending champion and world no.1 Novak Djokovic returns to the tour after a week of rest while skipping Madrid and his path to a new title is a bit rocky to say the least. #5 seed Stefanos Tsitsipas is a potential ¼ final matchup and a possible semi against either Thiem or Rublev could be stiffer test but a good one for those players to see where their clay court preparation has come so far.

The Serb has an outstanding 56-10 record on the event and since 2013 he has been always part of the last 2. Unfortunately for him, after winning the titles in 2013 and 2014, he had lost 4 consecutive finals before claiming the title yet again last year. Its hard to beat Novak at any given tournament, but in Rome is somehow even more difficult.

After winning Monte Carlo and losing the final in Barcelona, Tsitsipas surprisingly lost to Casper Ruud in Madrid R2. This could be a blessing in disguise though as he caught much needed breather after weeks of grueling deep runs in high caliber tournaments. He lost to Jannik Sinner in R1 last year and could only gain points this time around in a much sunny and faster conditions than September last year.

Dominik Thiem returned in Madrid after a long lay off after being defeated in Dubai in March. He decided to add some extra time away due to not being at the needed level to play both mentally and physically.

“My goal is to get a lot of matches against top players until the French Open. It’s the same as every Grand Slam, it’s so tough to go deep and win it. But once I arrive at Roland Garros I want to be in the best shape and give myself the best chances.”

He has shown glimpse of his old self and would be interesting to see how far he could go here and if fatigue for playing consecutive weeks after such time away would have negative effects on him.

Rafael Nadal is the undisputed king of clay but some unexpected losses in last couple of weeks has put some doubts into his preparation for yet another title at the French Open and a possible record making 21st Grand Slam title.

After jumping off the h2h vs Zverev to a quick 5-0 lead, Nadal lost the last 3 matches against the German in straight sets, the last one coming in Madrid this week. The Draw in Rome hasn’t been kind as well, as they both find themselves on a path to meet in the QF.

Zverev had a total turnaround in Madrid after hitting 14 double faults and losing to Ilya Ivashka at home in Munich just a week prior.  In Germany he was scared to attack, and his serve was all over the place, but in Spain – a whole different story. The serve returned to be a huge weapon, aggressive approach and low count of unforced errors helped him get past Nadal as well and he has a legit chance not only to take the title in Madrid, but also to go deep in Rome as well.

With 1 title in 2017 (def. Djokovic) and 1 final in 2018 (lost to Nadal) he is surely one of the favorites here to go deep yet again. His part of the draw consists of Daniil Medvedev, who simply dislikes the surface and has expressed it while talking to himself in Madrd, and a trickier one against Diego Schwartzman, who despite choking to Carreno Busta in Barcelona and losing to Karatsev in Madrid has played a SF and a Final in last 2 appearances in Foro Italico

Jannik Sinner would have a tough job against Rafael Nadal if he gets through his R1 match against Humbert, but he is more than capable of putting pressure into the Spaniard and why not causing an upset along the way?

Lorenzo Musetti is an interesting Italian prospect that was given a wildcard into the event. After his run in Acapulco ,where he started from the qualies and made it all the way to the semis where he lost to Tsitsipas , he cooled off with switching surfaces from hard to clay with most notably being defeated by Carlos Taberner as a -400 favorite in Madrid qualies. Last year he started from qualifying in Rome and lost in the 3rd round while beating Stan Wawrinka as a +270 underdog ,now directly from the Main Draw, I believe in his abilities to bounce back and at least get past the Miami Open champion Hurkacz

Pay close attention to the weather conditions in Rome, as they will be totally different than the heavy and rainy ones displayed last September which favored the typical clay courters and the ones that had patience constructing the points. Ball will not jump that high as in Madrid but still it will be on a faster side if it’s sunny and dry.

History…  Played since 1891, The French Open switched surfaces from sand to clay and continues to be played on that texture since 1908. It is arguably the most physically demanding Grand Slam to win due to ...

History…  First edition of the event and probably the only one going forward as it has only one-year license.  President Tennis Club of Montechiarugolo will host this event in incredibly beautiful sight of Parma and ...